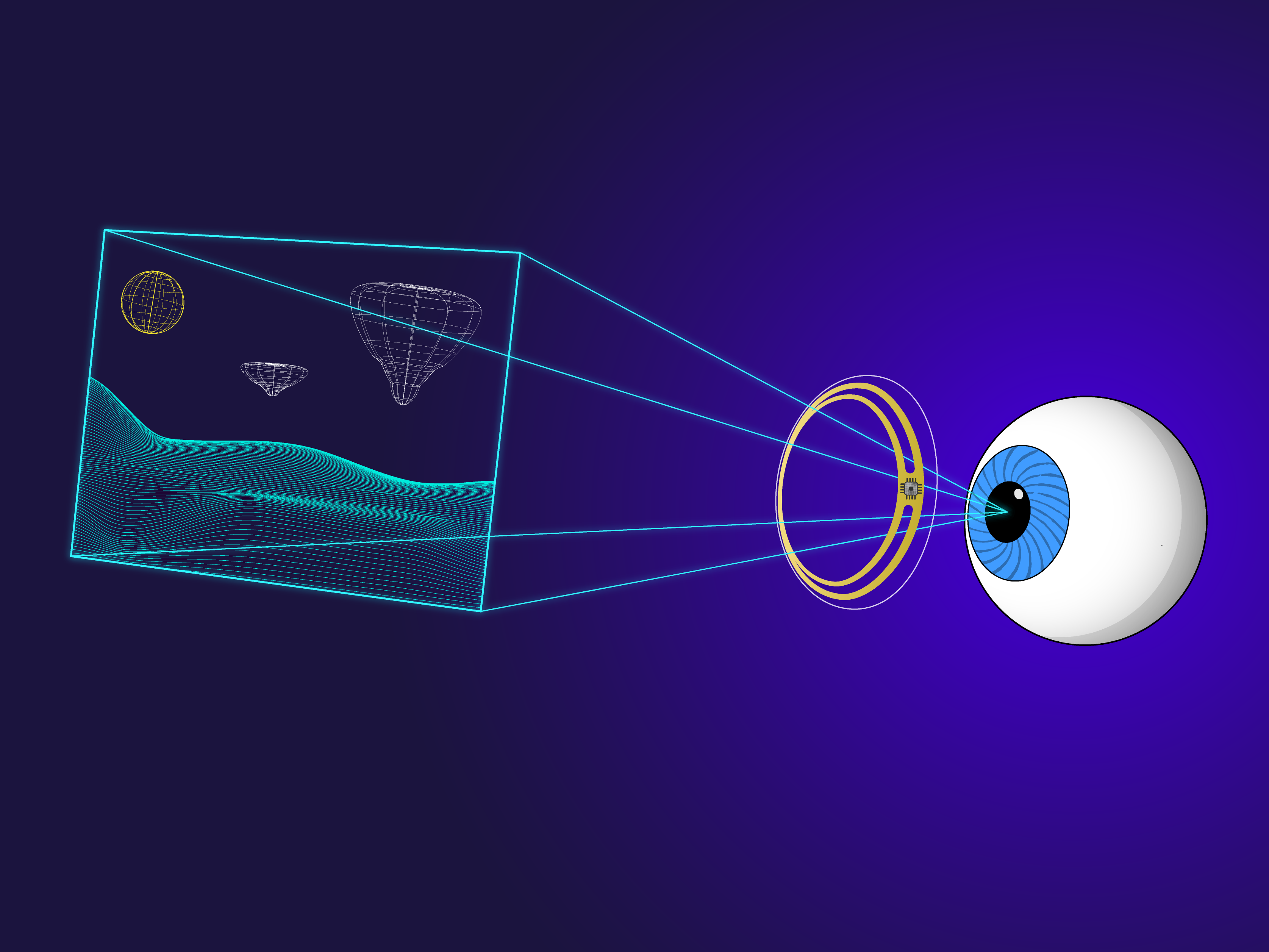 This design fiction is a short story about a VR lens concept. It describes a possible future where VR technology becomes more compact and used in our everyday lives. This will bring a lot of changes, both good and bad. The goal of this fiction is to get users thinking about those changes.

The moment Mark wakes up, he immediately reaches for a case on his nightstand. He opens the case and puts in his lenses. Mark makes some breakfast and puts it on the table. While Mark eats, he closes his eyes and tells Viu to open the news channel.

Mark opened his eyes and the channel turned off. It was time for his job, so he went to his office downstairs. While he calls it an office, it resembles more of an operating room. Mark was a renowned neurosurgeon who performed operations all over the world. Today he had to operate in New York and Tokyo. In his office, he stood in front of an operating table with surgery tools on the side. He closed his eyes again.

Suddenly, a bright light shone in the dark. Mark was inside a real operating room surrounded by several uncanny mannequins. Mark’s own arms also had this inhuman feeling to them, but only when one looked very closely. These new arms mirrored each movement Mark performed with his own arms back in the office. This way, Mark performed the surgery perfectly together with the other medical workers ‘present’ in the room. Mark opened his eyes again and he was back in his office. Mark had a while until his next operation, so he decided to relax. He sat back in his chair and grabbed a pair of controllers, one in each hand.

“Viu, take me to Isengard.”

A lush, green field appeared out of nowhere with floating islands in the sky.

“I can never get enough of this view, if only I could stay here forever.” said the tall, blonde elf flying across the field. But he couldn’t, because he had another surgery soon.

After his surgeries, Mark attended a meeting of freelance surgeons. This time, there were no uncanny mannequins in the room, as each person seemed to be present as a normal looking human. Of course, this was only because the entire room and the avatars were simulated, just like the games Mark played. A lot of money was saved by not having to rent a physical room with movable cameras for each person’s viewpoint. Mark did not think about any of this though, as at some point the line between virtual and real became blurred.

Several topics came up during the meeting. Most interesting to Mark was the recently announced NEW VIEW. Jim, who was also at the meeting, told Mark, “I heard the NEW VIEW will finally be able to function on it’s own, not just as a wireless display. So don’t waste money on a new phone this year.”

Another attendant, Sarah, replied, “That’s great, but I hope they focus on fixing the connectivity issues. Mine suddenly started displaying while I was driving, while my eyes were open.”

“Oh my god, the same happened to me when I was sleeping. Scared the shit out of me, suddenly seeing a person in my vision!”, yelled Chloe from the other side of the room.

“That’s why I take them out before sleeping”, said Mark.

Another topic that came up during the meeting was teamwork. As freelancers they often worked with complete strangers on life threatening procedures. That is why some of them employed their own assistants and nurses for specific tasks.

“Do you guys know any good anesthetists available for the next 6 months?”, asked Jim.

Sarah replied, “I actually had an applicant from Liberia in my mail last week, but she was viewless. A shame because she studied at Harvard.”

“Oh my god, that is sooo retrooo. You think she can’t afford it or it’s a religious thing?”, Chloe yelled again.

Mark was a bit surprised by what Chloe said, but he couldn’t bother reacting as this wasn’t the first time he heard something like it.

After the meeting, Mark opened his eyes and was back in his office. He went upstairs to the kitchen to make some dinner. He filled his belly and played some games until he was tired enough to go to sleep. Before jumping in bed, Mark made sure to take out his lenses. Slowly his right hand moved toward his right eye, but the moment his finger touched his eye, he realized there was no lens there.